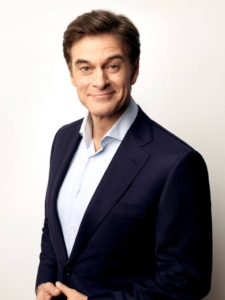 Dr. Oz was born in Cleveland, Ohio, raised in Delaware and received his undergraduate degree from Harvard University (1982) and obtained a joint MD and MBA (1986) from the University of Pennsylvania School of Medicine and Wharton Business School.  He was awarded the Captain’s Athletic Award for leadership in college and elected Class President twice followed by President of the Student Body during medical school.  He lives in Northern New Jersey with his wife Lisa of 32 years and their four children, Daphne, Arabella, Zoe and Oliver and four grandchildren Philomena, John, Domenica, and Giovanna.

Previously, Dr. Oz was a featured health expert on “The Oprah Winfrey Show” for six seasons, spanning over 60 episodes.  He also served as chief medical consultant to Discovery Communications, where his “Transplant!” series won both a Freddie and a Silver Telly award. He also served as medical director of Denzel Washington’s “John Q” and performed in the hip-hop video “Everybody” as part of the Let’s Move Campaign.

Dr. Oz authored eight New York Times Best Sellers, including “Food Can Fix It”, “YOU: The Owner’s Manual”, “YOU: The Smart Patient”, “YOU: On a Diet”, “YOU: Staying Young”, “YOU: Being Beautiful”, “YOU: Having a Baby”, “YOU: The Owner’s Manual for Teens”, as well as the award-winning “Healing from the Heart”.  He has a regular column in Oprah Magazine and his article “Retool, Reboot, and Rebuild” for Esquire magazine was awarded the 2009 National Magazine Award for Personal Service. He co-founded Sharecare.com which won “Best Medical App” award for AskMD in 2014 and its DoctorOz app was nominated for an Emmy in 2017. In 2003, Dr. Oz founded Healthcorps which emulates the Peacecorps model by putting energetic recent college graduates into high schools around the country to teach diet, fitness, and mental resilience. Over a million teens have been influenced by this nationwide program.

In addition to belonging to every major professional society for heart surgeons, Dr. Oz has been named Time magazine’s 100 Most Influential People, Forbes’ most influential celebrity, Esquire magazine’s 75 Most Influential People of the 21st Century, a Global Leader of Tomorrow by the World Economic Forum, Harvard’s 100 Most Influential Alumni, as well as receiving the Ellis Island Medal of Honor and AARP 50 Influential People Over 50.  He won the prestigious Gross Surgical Research Scholarship, and he has received an honorary doctorate from Istanbul University.  He was voted “The Best and Brightest” by Esquire Magazine, a “Doctor of the Year” by Hippocrates magazine and “Healer of the Millennium” by Healthy Living magazine.  Dr. Oz is annually elected as a highest quality physician by the Castle Connolly Guide as well as other major ranking groups.  He is also an honorary police surgeon for New York City.

Better Safety Stats by Creating a Culture of Self-Care

Sergio has over 21 years of experience as a holistic health coach, personal trainer and nutritionist. In addition to working with dozens of professional athletes, CEO’s and celebrities, Sergio has also developed and implemented a variety of wellness, safety and productivity programs for many corporations and community organizations.

Sergio’s extensive experience in functional movement, cellular nutrition and workspace wellness, coupled a degree in psychology, provide a well-rounded and effective approach to healthy transformations for both individuals and organizations.

Sergio’s media experience includes 11 years as the Fitness & Wellness Expert for NBC5 in Chicago, appearances on the Today Show, MTV2’s Battlegrounds and was a finalist featured trainer for the Dr. Oz Show. He has also written for national publications including Men’s Fitness Magazine and ESPN Teen.

Sergio is currently a corporate health consultant and is working with Hirschbach Motor Lines in Dubuque, Iowa developing health programs for truck drivers. Additionally, Sergio is the former Strength & Conditioning Coach for the WNBA’s Chicago Sky and the former Executive Director of President’s Council on Fitness, Sports and Nutrition. 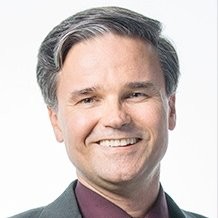 The Economics of (In)attention: Navigating the Distractions of Technology in a Fleet Safety Environment

Dr. Atchley is an internationally recognized researcher in the area of distracted driving.  His work has focused on understanding the impact distraction has on attention to the roadway, why we chose to drive distracted, defining the reasons for technology addiction and defining the circumstances that promote a safer driving culture.  He is part of efforts at all levels to reduce distracted driving.

As a professor, he has received awards for his research, teaching, service, and student advising.  Dr. Atchley’s work has been highlighted by national and international press such as the BBC, NPR, and the New York Times and in two books, “A Deadly Wandering” and “The Nature Fix”.  He is co-editor of a book this fall titled “Human Capacity in the Attention Economy” which broadly explores the impact of our increasingly divided attention. 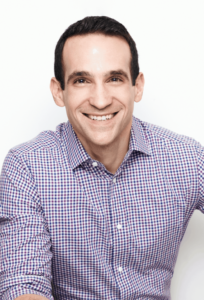 Indistractable: How To Control Your Attention and Choose Your Life

Nir Eyal writes, consults, and teaches about the intersection of psychology, technology, and business. Nir previously taught as a Lecturer in Marketing at the Stanford Graduate School of Business and the Hasso Plattner Institute of Design at Stanford.

Nir co-founded and sold two tech companies since 2003 and was dubbed by The M.I.T. Technology Review as “The Prophet of Habit-Forming Technology.”

He is the author of two bestselling books, Hooked: How to Build Habit-Forming Products and Indistractable: How to Control Your Attention and Choose Your Life.

In addition to blogging at NirAndFar.com, Nir’s writing has been featured in The New York Times, The Harvard Business Review, Time Magazine, and Psychology Today. 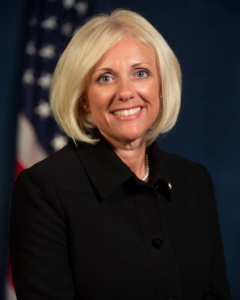 Road Safety Updates and Perspectives from the NTSB

Jennifer Homendy took the oath of office as the 44th Member of the National Transportation Safety Board (NTSB) on August 20, 2018. She was unanimously reconfirmed by the Senate on August 1, 2019, for a five-year term expiring December 31, 2024.

Member Homendy is a tireless advocate for safety and brings to the Board expertise in the safety of railroads, pipelines, and hazardous materials (on all modes of transportation). From 2004 to 2018, she served as the Democratic Staff Director of the Subcommittee on Railroads, Pipelines, and Hazardous Materials, which is under the jurisdiction of the Committee on Transportation and Infrastructure (T&I Committee) of the United States House of Representatives. She previously held positions with the International Brotherhood of Teamsters, the Transportation Trades Department of the AFL-CIO, and the American Iron and Steel Institute.

During her tenure as Subcommittee Staff Director, Member Homendy guided major pieces of rail, pipeline, and hazardous materials safety legislation through the legislative process, including: the Safe, Accountable, Flexible, Efficient, Transportation Equity Act: A Legacy for Users (SAFETEA-LU); the Rail Safety Improvement Act of 2008 (P.L. 110-432, Division A); the Passenger Rail Investment and Improvement Act of 2008 (P.L. 110-432, Division B); the Pipeline, Inspection, Protection, Enforcement, and Safety Act of 2006; the Pipeline Safety, Regulatory Certainty, and Job Creation Act of 2011; the Fixing America’s Surface Transportation (FAST) Act of 2015; the Protecting Our Infrastructure of Pipelines Enhancing Safety (PIPES) Act of 2016; and the Norman Y. Mineta Research and Special Programs Improvement Act of 2004, which created the Pipeline and Hazardous Materials Safety Administration (PHMSA), an agency charged with overseeing the safety of our nation’s pipelines and hazardous materials transportation within the U.S. Department of Transportation (DOT). Throughout her tenure on the T&I Committee, she was an unwavering defender of transportation safety and worked to implement numerous safety recommendations proposed by the NTSB, including the installation of excess flow valves in distribution pipelines and implementation of positive train control (PTC).

In 2010, she spearheaded the T&I Committee’s extensive oversight investigations of the Enbridge pipeline rupture in Marshall, Michigan, and PHMSA, which led to major safety improvements in pipeline and hazardous materials safety. In 2017 and 2018, she led a multimodal review of DOT’s drug and alcohol testing program that identified significant safety gaps in the program.

Member Homendy is a graduate of the Pennsylvania State University and has been certified by the National Board of Fire Service Professional Qualifications (Pro Board) on Core HazMat Operations and Missions-Specific PPE and Product Control (hazmat operations level training). She completed Private Pilot Ground School and holds a motorcycle (M2) endorsement. She is also an avid runner and cyclist, which fuels her advocacy work for strengthening safety for pedestrians, bicyclists, and motorcyclists.

Road Safety Updates and Perspectives from the FMCSA

James Wiley Deck is the Deputy Administrator of the Federal Motor Carrier Safety Administration. He returns to FMCSA where he previously held the position as Director of Government Affairs from 2017 to 2019. For the past year, Wiley has served as a Senior Policy Advisor to U.S. Transportation Secretary Elaine L. Chao, where he covered FMCSA, the National Highway Traffic Safety Administration (NHTSA), the Federal Transit Administration (FTA) and the Department’s Office of Drug and Alcohol Policy and Compliance (ODAPC).

Wiley began his Federal career in 1994, serving on the staff of Congressman John L. Mica (FL). Throughout more than 23 years of service to Rep. Mica, Wiley held a series of positions with progressively increasing responsibility culminating with six years as the Chief of Staff. Prior to joining FMCSA, Wiley also served as the Director of Oversight and Investigations for the U.S. House of Representatives Committee on Transportation and Infrastructure.

Wiley holds a Bachelor’s degree in political science from the University of Central Florida.

With his decades-long Capitol Hill experience and special focus on national and regional transportation issues, Wiley understands the critical role that the truck and interstate bus industries play in keeping our nation’s economy strong and continually moving forward.

He is equally committed to safety and he ardently supports expanding and enhancing FMCSA stakeholder partnerships and collaboration toward the goal of reducing commercial vehicle-involved crashes and improving safety for all travelers on our highways and roads.